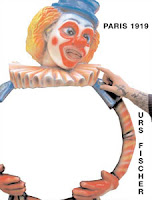 Paris 1919
By Urs Fischer
Known here in Houston for his most recent installation at the Blaffer Gallery, Swiss artist Urs Fischer makes large scale environments that often play with art historical referents. In Paris 1919, we see an Alpine interior constructed entirely of stale brown bread. It is an Anselm Kiefer brought to life in dough. Images of Catherine Deneuve pop up from inside a computer keyboard. A crumbling breeze block wall is an impromptu readymade on the street. Fischer is an alchemist, turning the mundane on its head and playing with the ideas of deconstruction, decay, and, at the same time, growth. He often seems to be working within the constraints of what material is available immediately around him. His smaller constructions have the feel of a Richard Tuttle, albeit with a more punk spirit. Price: $29.00

Atelier Van Lieshout
By Jennifer Allen, et al.
Joep Van Lieshout and his studio make sculptures that could be architecture, or is it the other way around? Van Lieshout began making self-contained living units that were often for a particular purpose, such as a capsule for to inspire love-making, or a living unit that glommed on to an existing building like a parasitic growth, giving its inhabitants more living space. In Atelier Van Lieshout, drawings for unrealized projects live side-by-side with the things that did make the cut. Included in the projects that remain to be realized are a Brothel with Greenhouse from 1999 and a Slave City from 2005- (ongoing). Van Lieshout's program is a utopian vision gone horribly awry (as they are wont to do). Earlier work included a declaration of a sovereign state, complete with banknotes and weapons, including a Mercedes Benz outfitted with a cannon. Price: $55.00 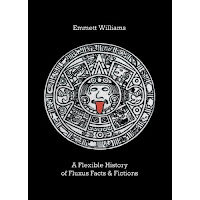 A Flexible History of Fluxus Facts & Fictions
By Emmett Williams
Octogenarian Emmett Williams is the oldest living Fluxus artist. In A Flexible History, Williams writes about the movement he helped to foster and in Fluxus fashion, reveals truths and creates fictions that further serve to obfuscate the movement as a whole. Fluxus, with its groundings in vaudeville and at the same time, Eastern philosophies, is a movement characterized by the idea of entertainment in art. Their performances were often amusing, referencing children's games, Spike Jones, and novelty gags. The recurring motif of a pre-Columbian hieroglyphic head with its tongue stuck out is a cipher for Williams, his tongue stuck out at his collaborators like a petulant child. Price: $45.00 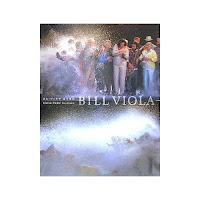 Bill Viola: Hatsu-Yume, First Dream
Catalogue by Mori Art Museum and Tankosha Publishing, Inc.
In Japan, the first dream one has on the first night of the New Year is called hatsu-yume. It is said that this dream is a portent for the rest of the year and auspicious dream symbols include eggplant, Mount Fuji, or a hawk. For Hatsu-Yume: First Dream, a single channel video by Bill Viola, we see a series of images from various locales around Japan. The introduction to the catalogue describes Hatsu-Yume as a type of abstract road movie. We are the dreamer and the video is our dream. How the symbols are to be interpreted depends is largely subjective. What follows is a selection of works from 1976-2004, including an in-depth look at Viola's The Passions project. Price: $42.00 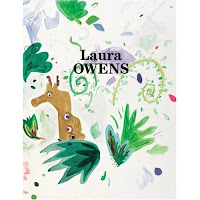 Laura Owens
Catalogue by Kunsthalle Zurich and JRP/Ringier
Inspired by Asian scenes painted on silk panels, painter Laura Owens meshes the upended Asian sense of perspective and brings it into contact with abstract expressionism, folk art, arts and crafts, and decorative painting. For Owens, cultural identity and tradition are turned upside-down as a way to circumvent the burden of the history of painting and its attendant irony. Her palette is delicate and restrained when it needs to be and bold at the right time. For this catalogue from the Kunsthalle Zurich, the authors have included a series of pages in the front and rear that serve to show the size relationships amongst the various paintings. This is an interesting and instructive detail for painters. Price: $55.00  ¶ 4/04/2007 01:12:00 PM 0 Comments